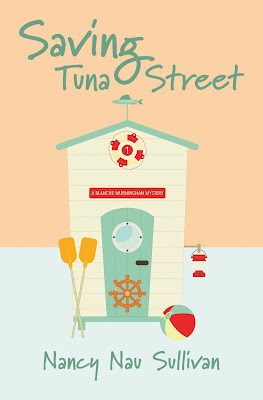 Nancy Nau Sullivan’s first mystery in the Blanche Murninghan series, Saving Tuna Street, launches June 23. It's a series with a suitcase--next installment, Mexico, then Vietnam, Ireland, Argentina, and Spain. A former journalist, Nancy taught English in Argentina, Mexico, and at a boys’ prison in Florida. Learn more about Nancy and her books at her website.
It’s a Mystery to Me
I asked some critique groups I belong to for comments about likes and dislikes of the mystery genre:
First off, one reader jumped right in to put mysteries into two camps: A mystery is suspense (the reader knows who did the deed but is held in abeyance with the author’s sleight of hand) and the mystery is thriller (the reader doesn’t know the perpetrator and there’s a thrill around every corner until the end). One reader mentioned that many writers combine both—He offered Lisa Unger and Greg Iles as examples.
Agatha Christie is right up there on the lists of most popular mystery writers. In her books, the reader doesn’t know whodunit until the puzzle pieces are put together at the end. Agatha has four on the list of the top 100 mystery stories, according to Mystery Writers of America. (Strangely enough, To Kill a Mockingbird is number 60--for its suspense? Rosemary’s Baby comes in at 100. Isn’t that horror?)
The lines are blurred, and waver all over the genre. Carolyn Keane, the pseudonym for Nancy Drew, is probably single-handedly responsible for inspiring a generation of mystery writers, even though Nancy did not deal in dead bodies. She was busy finding out who stole the heirlooms and driving around in that fabulous little roadster. I got hooked early.
Other notes in my unscientific survey:
·   Clues. “They shouldn’t look like clues until the end,” said Dawn. Lisa likes “delicious, well-place clues.” Rachael likes “a mix of subtle and obvious clues.”
·   Murder. “Most people don’t understand it, and they want to know why someone would do such a thing,” according to Yvonne. It’s “intriguing and, usually, the stakes are high.”
·   Design. A good mystery should be like “a puzzle, like a locked room, and it’s fun to finally get in,” says Jacquelyn.
Some readers object to the lack of diversity in mysteries and a tendency toward misogyny and sexism. As regards the latter, Melissa was turned off by the writer who was obsessed with breasts. He had breasts “winking” and “smiling” in nearly every scene with a female.
A couple of readers said they don’t like the killer to come out of left field, or the evil twin to show up with little explanation, or the cop to always be a bumbling idiot.
Julienne does not like “shock at the expense of logic.” I recall my addiction to Perry Mason, and wonder why out of the half a dozen suspects the least likely was the one to usually jump up in the back of the courtroom at the last minute. I cry, foul.
Some readers don’t want a lot of clues and say they are smart enough to figure it out. They are unhappy with books that hand over the outcome too soon. Nonetheless, the story does need to wrap up nicely. Melissa put the capper on it: “I love the moment it all comes together, when the disparate threads make sense.” For each reader, that moment may be different, but most agree it does need to happen. Mystery writers should not leave their thread hanging…
What is it for you? Why do you like mysteries?
Saving Tuna Street
A Blanche Murninghan Mystery, Book 1
Blanche “Bang” Murninghan is a part-time journalist with a penchant for walking the beach on her beloved Santa Maria Island. Gran left her a cabin on Tuna Street, and she’s got her friends and family. All is well. Until the land-grabbing goons arrive. Blanche finds herself in a tailspin. Her friend, Bob Blankenship is found murdered, and she suspects the slick, handsome land developer Sergi Langstrom and his company of chaos are behind it all. Blanche keeps digging. All the way to hell. The goons, it seems, are a front for a drug cartel.
The harder Blanche pushes against the source of trouble, the more she is sucked into the vortex of greed, murder, drug runners, and kidnapping (hers). Who can look away? It’s like watching a hurricane, which, literally, comes straight for Tuna Street.
Buy Links
paperback
ebook
← Older Post Newer Post →
Loading...
Error