Burger Chef and Dan Died on the Same Day

If you’re like most 16 year old males, there’s a better than average chance that the suit inventory in your wardrobe consists of a total of one. And by suit I mean the matching sport coat and pants that was purchased on clearance from a discount warehouse that has as much chance of staying in business as a groundhog attempting to take up tenure on the 18th hole of Torrey Pines. It’s the periodic skeleton in the closet that rears its head primarily during weddings you don’t care about, shows its face annually to celebrate the birth of Jesus at the church you otherwise never attend and the threads that make an intermittent appearance at whateverthefuck anniversary or birthday you’re required to participate in. Not to mention the occasional unanticipated funeral.
We’ll get back to the suit momentarily.
While growing up in the Midwest, a significant part of my weekly caloric intake came from Burger Chef. For those unfamiliar with it, Burger Chef was a fast food restaurant chain that originated in Indianapolis, Indiana in 1954. It rapidly expanded throughout the United States and at its peak in 1973 approached 1,200 locations, challenging McDonald’s for artery-clogging supremacy. It was a mostly now-forgotten pioneer on many levels, patenting the first flame broiler that is now standard throughout the industry. But perhaps the most lasting and ingenious element that Burger Chef introduced to the fast food marketplace was an understanding that its success was primarily predicated on its ability to market specifically to children. They initially introduced a couple of mascots: Burger Chef (who looked sort of like everyone’s creepy uncle) and his sidekick Jeff (who looked like the kid everyone beat up on in high school). They were also the first fast food concept to introduce a meal specifically targeted at kids – the Burger Chef Funmeal (five years before McDonald’s would copy the idea with their own Happy Meal). The Funmeal included a small hamburger, fries, dessert and a drink that came in a colorful box containing puzzles, riddles, stories and toys. No one had ever seen the likes of this sort of culinary miracle before, and not a week went by that Burger Chef didn’t coerce a portion of my father’s paycheck from him just to get me off his back.
Back to the suit.
Mine was a shade of brown that when worn made me look like a turd that had escaped the toilet pre-flush and had – through some genetic malfeasance – CONTINUE READING: Burger Chef and Dan Died on the Same Day | Dissident Voice 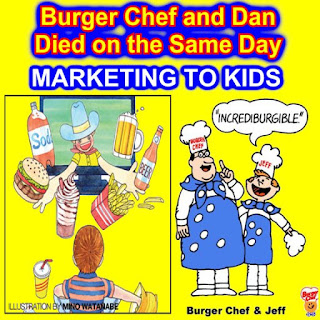