Home / Feed / Doctor Who The Edge of Reality 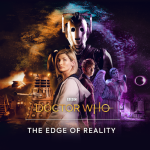 To be honest, Doctor Who’s The Edge of Reality is more of a remake than a sequel to the Edge of Time. The first game was a VR title and the new one can be played on standard 3D desktops and consoles.

When I first reviewed Doctor Who the Edge of Time my response was that it was a slightly about average VR  that was worth the very affordable price tag it had been given. That being said Doctor Who The Edge of Reality suffers from a higher bar when it is pitted up against other non-VR narrative adventure games that can be purchased.

Essentially it is the same game with a few new elements added. The most important of these elements is the addition of the tenth Doctor Who David Tennent. Tennent is arguably the most popular of the modern incarnations of Doctor Who and it is understandable that the developers would want his considerable fan base to be intrigued by his addition to the game. Sadly the addition of Tennent did not improve the issues that the game offers.

As I have mentioned this is a port of a VR game which makes the conversion of the controls a bit clunky. They are not the most responsive and can be frustrating.

The puzzle style of the game also feels like a throwback to games of the late 90s. There is a lot of pixel hunting involved as well as the collection of materials that may not feel particularly relevant.

You begin the game in a laundromat which is very unassuming and you learn the basics of picking up items that make up the bulk of the game. The puzzles are not challenging. Most of your work involves looking back through the environment to find the missing pieces to complete the puzzle. There is even a puzzle to get the Tardis to kick into gear. You get to see a lot of famous Doctor Who villains but there is really no exciting set-pieces with any of them.

The graphics are nothing too spectacular as they were originally rendered for the world of VR where AAA graphics are few and far between. As a lifelong Doctor Who fan it feels disappointing to me. There are so many possibilities with the Doctor Who Intellectual property and this just falls short of all of them.

Doctor Who The Edge of Reality is an OK narrative adventure game that may have some interest for Doctor Who fans but will not compete with the AAA holiday titles currently on the market. At $24.99 it is an affordable title and would make a great gift for the Doctor WHo enthusiast in your life or if you are looking to have a bit of fun traveling through time.

A sample key of Doctor Who The Edge of Reality was made available by the developers.

Thoughts expressed in this article are the authors alone and not that of the developers or editorial staff.

Click through to read all of "Doctor Who The Edge of Reality" at GeekDad.If you value content from GeekDad, please support us via Patreon or use this link to shop at Amazon. Thanks!