This will certainly be an unusual Mother's Day for many families, having to celebrate from afar. We had not planned on leaving Yuma prior to June, so were not planning to have a face to face day. My heart goes out to those families with little ones who are not able to get those special hugs from their grandparents. And, to the many seniors who are alone and afraid to go out.

May 1st was a special anniversary day for us. It was the 10 year anniversary of our full time RV adventure. Looking back, we had many more pluses than minuses. We're so glad we made the decision to retire early, and make it work for us. Although, we bought our park model in Arizona after 8.5 years of full time living in the fifth wheel; I still feel we can be considered somewhat full timers. After all, the park model is licensed as an RV through the DMV in Arizona. This was our campsite that day. We've been in many, many campsites since then, but this one will always be special to us. 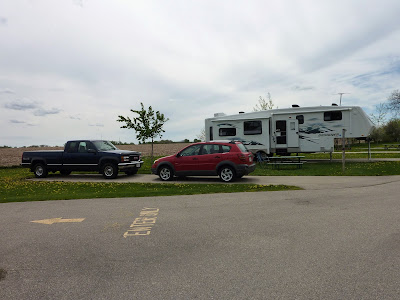 We are still hoping to leave sometime in June, but that all depends on how the virus situation is at that time. No sense in driving north if we can't visit with our families. I sure do miss them!

It has been hotter than average the last 2 weeks. We had highs from 101 to 107 degrees. It's not bad in the early morning hours, but after that it's just darn hot. We try to ride our bikes for an hour each morning. There were some very beautiful cactus blooming in the park. 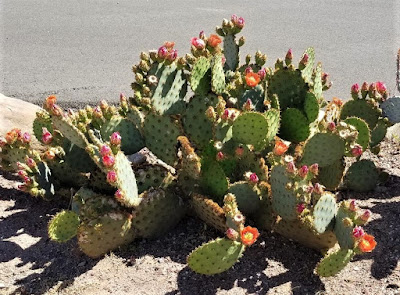 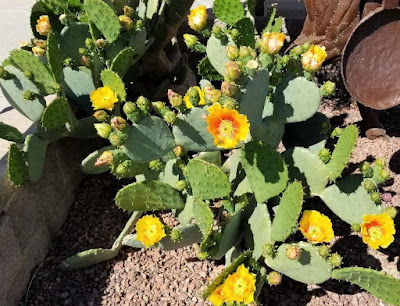 This is an unusual flower. I don't know what type of cactus it is. 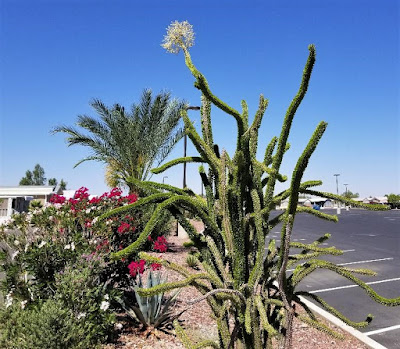 We've been golfing about once a week with our friends Brad and Martha at Coyote Wash Golf Course. It's on the other side of the foothills in the town of Wellton. Their off season price is $25 for 18 holes with a cart. The courses in Yuma are still charging between $40 and $45 dollars. Pretty much a no brainer as to where we're playing.  We also play at our course for $10 for 9 holes. It's only open to residents of the resort at this time, though. Again, with the heat we're out there at 7 am. That's early for those of you that know Kevin.

Brad and Martha brought us some grapefruit and a tangelo from the trees in their yard. The small orange is a mandarin for comparison. The grapefruit were huge and delicious. 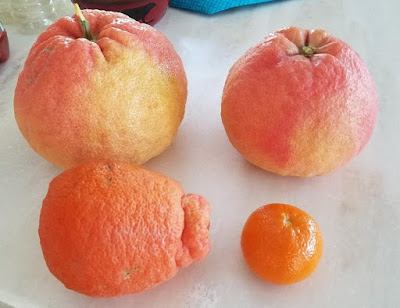 The pool has been closed since mid March due to the virus. Some people have resorted to buying a blow up pool. Whatever it takes. There are only 16 RVs left in the RV section of the park. Quite a few of the park models are still occupied, although each week a few more leave. I believe there are about 75 people who live here year round. 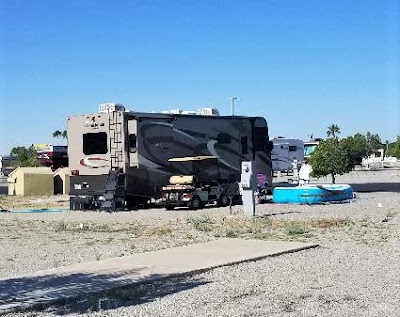 A few weeks ago before it got super hot, Kevin (with some help from Brad) built new doors for our shed. The old ones had some rotten sections, and were in rough shape. I primed the new ones. The board above the doors still needs to be replaced. Next year, the whole shed will get a paint job. The first picture is the old doors, the second is the new doors. 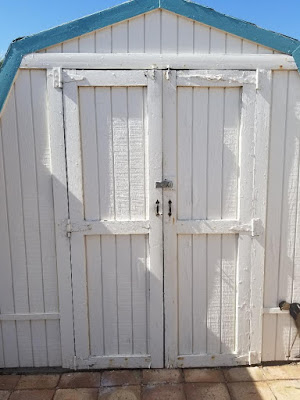 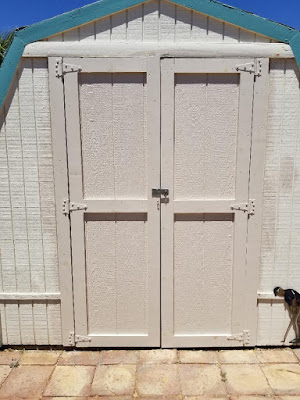 Many of our northern friends and family understand cabin fever during the winter. That's how we've felt with the heat. We're getting pretty bored. The resort has puzzles to borrow, so here's the first completed one. Take a look at the thermometer above it. That's right, 100 degrees before noon. We're doing a lot of reading, too. Thank goodness for ebooks. 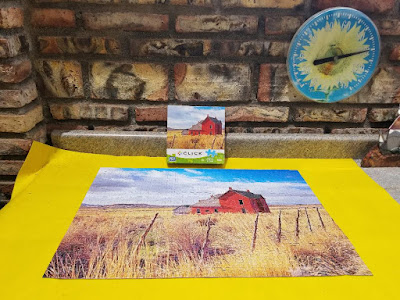 I've also been working on some quilts I started during the winter. This is a wall hanging I made for our Arizona room (family room). 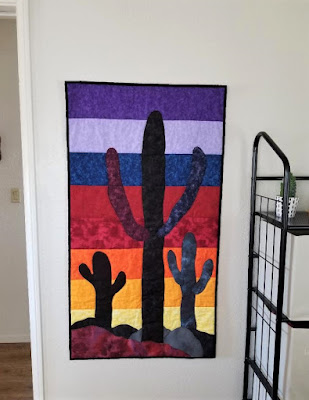 I love this poppy panel. I saw this pattern online, and needed to make it. It's on the back of my recliner now. 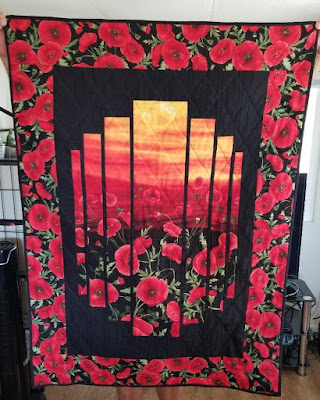 I have a few more finished quilt tops that need to be quilted. That's next on the agenda. I'm also working on a Christmas one, and a few baby ones for Cathryn to give to friends that are expecting.

For Cinco de Mayo, the resort had a drive through margarita party. We pulled up to the curb in our golf cart, they handed us each a margarita and a bag of chips. Everyone lined the side of the road, and greeted each other. Strange, but it was nice to see some people again. On Monday morning, they are having drive through mimosas with pastry for Mother's Day. They are also offering virtual bingo each week. My luck with that has been the same as regular bingo!! None!!! 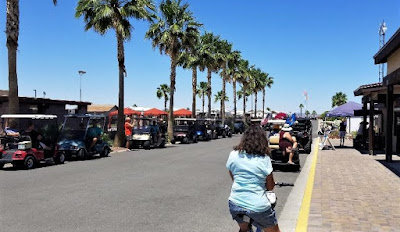 Our daughter-in-law Cathryn is an occupational therapist at Bryan Health in Lincoln, Nebraska. An artist painted a wings mural for the staff to take pictures in front of at two of their campuses. Here's Cathryn with her wings. Cathryn's sister Samantha is a physical therapist at a different facility in Lincoln. I'm so grateful to Cathryn, Samantha and all the healthcare workers on the front line at this difficult time. They truly are angels!!! 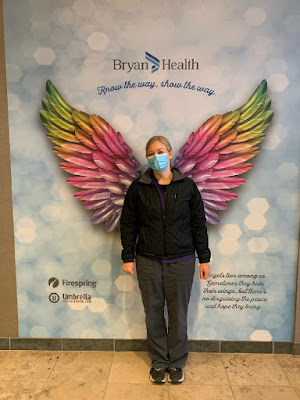 We really are doing quite well. We're healthy and safe. A little boredom is a small price to pay for that. I feel so bad for those out there that are suffering either through illness or financial hardship. I pray this ends sooner than later!!!
← Older Post Newer Post →
Loading...
Error