Scientists say they have found the most detailed evidence yet of long-flowing, ancient rivers on Mars. The discovery supports existing evidence that Mars – which today is dry and cold – was once a water-rich planet. The researchers say their findings suggest rivers may have flowed on the surface of Mars for hundreds of thousands of years. The evidence came from new satellite pictures of the Martian surface. These images were captured by a camera on NASA’s Mars Reconnaissance Orbiter. The camera is able to take detailed pictures of the surface while orbiting the planet from about 400 kilometers away. A team of scientists studied the images, which showed a rocky area within the planet’s Hellas Impact Crater. An impact crater is formed when a space object crashes into a planet or moon. The Hellas Impact Crater, in the southern Martian hemisphere, is one of the largest formations of its kind in the solar system.   The team was led by Francesco Salese, a geologist at Utrecht University in the Netherlands. The research results were recently published in a study in Nature Communications. Salese said the scientists studied sedimentary rocks from a 200 meter high rocky cliff. Sedimentary rocks form when sediment, transported by water or wind, settles and forms solid rock.    “These are sedimentary rocks, 3.7 billion years old, and were formed by rivers that were likely active for over 100,000 years of Martian history,” Salese said in a statement.    “OK, it is not like reading a newspaper, but the extremely high resolution imagery allowed us to ‘read’ the rocks as if you are standing very close to the cliff,” he added.   Salese said even without the ability to examine the cliff area up-close on Mars, the pictures show strong similarities to sedimentary rocks found on Earth. The researchers created three-dimensional, or 3D, images of the area to get a more detailed understanding of it. The pictures suggested that some ancient Martian rivers were several meters deep. William McMahon is another geologist who was part of the investigation team. He said sedimentary rocks have long been studied on Earth to learn what conditions were like on our planet millions, or even billions of years ago. “Now we have the technology to extend this methodology to another terrestrial planet, Mars, which hosts an ancient sedimentary rock record which extends even further back in time than our own,” McMahon said in a statement. Another leader of the team was Joel Davis, a researcher with Britain’s Natural History Museum. He said scientists had never before been able to examine such a rock formation with such great detail.   Davis said the discovery is “one more piece of the puzzle in the search for ancient life on Mars.” He added that it also provides new evidence of how much water existed on Mars in ancient times. “The rivers that formed these rocks weren't just a one-off event - they were probably active for tens to hundreds of thousands of years,” Davis said. Salese added that the findings show Mars had an environment able to support large, flowing rivers for extended periods of time. “This kind of evidence, of a long-lived watery landscape, is crucial in our search for ancient life on the planet,” Salese said. I’m Bryan Lynn.   Bryan Lynn wrote this story for VOA Learning English, based on reports from Britain’s Natural History Museum, Utrecht University and Nature Communications. Mario Ritter, Jr. was the editor. We want to hear from you. Write to us in the Comments section, and visit our Facebook page.     ________________________________________________________________   Words in This Story   crater – n. a large hole in the ground geologist – n. a scientist who has studied rocks and soil in order to learn about the history of planets cliff – n. an area of high, steep rocks sediment – n. a solid substance that forms a layer at the bottom of a liquid resolution – n. a measure of sharpness for an image three-dimensional – adj. appearing to have length, depth and width terrestrial – adj. relating to the Earth, not space host – v. to serve as a host for something puzzle – n.  a game or activity in which you have to put pieces together or answer questions using skill crucial – n. extremely important or necessary 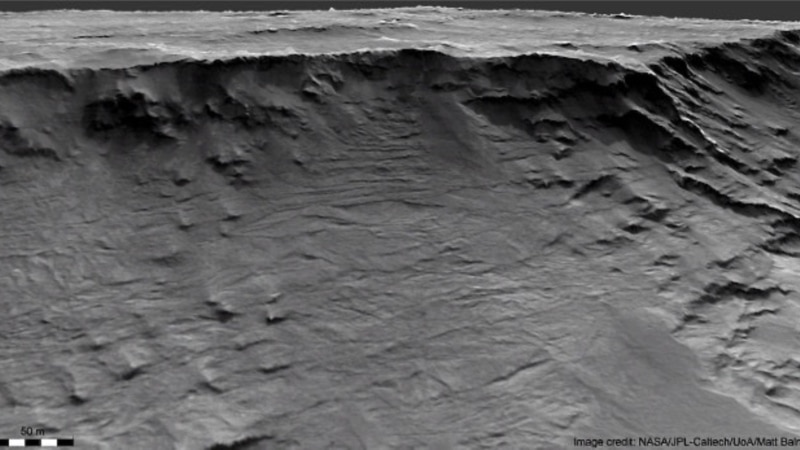