I don't know about you, but I think I am beginning to suffer from "pandemic fatigue." Yup, another new term to add to the already full language of this crazy time in history. Living here in Florida, we've also got the upcoming hurricane season to endure, hopefully unscathed, but there are no guarantees. To make matters even crazier, a neighbor told me last night, as I was returning from a sunset watch, that there is a large dust storm coming from the Sahara Desert.  Make that massive. What next?
By now we all know that the cases are going up in Florida, as well as other places around the world that are letting folks out. The Orange County Mayor has issued a mandatory mask order which does not include exercising outdoors, thank goodness. Who knows if they help, but one thing I do know is that they cannot hurt, so of course we are complying. That is pretty easy for me because I go so few places, if you do not include the beach, or a mostly deserted park. I had to go to Publix today and I nearly forgot the one way shopping because it has been maybe two weeks since my last visit. That said, I do continue to go to Clemons for produce where it is pretty easy because at any one time there might be maybe 15 people in the store. For four weeks now I've been trying to buy some Arborio rice to make risotto with no success. The same goes for our beloved refrigerated Clausen pickles. Empty shelves in both instances. I just don't get it. Speaking of pickles and Clemons, I found some tiny cukes and made them myself, using the brine from the Clausens. And now, thanks to the man of the house, I cannot only find the jars, but the shelves are spotless! 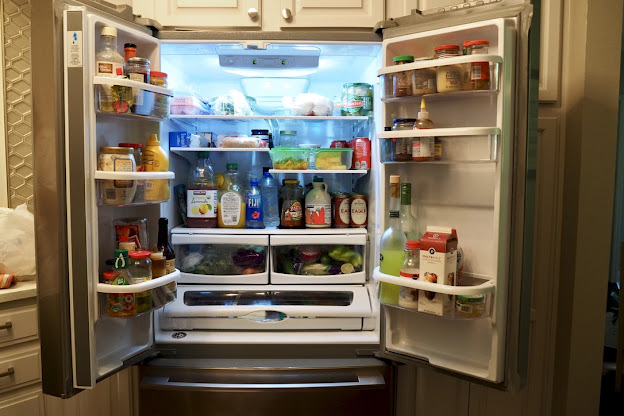 Here's a little behind the scenes info regarding this blog. Before Google forcing me to change my ways, I would scan through my photos, pick some I thought might either document our lives, or that are maybe interesting, then upload them to a folder. From there I would import them into yet another folder on Blogger (blog site), and choose them one by one to fit a narrative. Now, however, should I do it that same way, all photos end up in this space in the order I uploaded them, not necessarily how I want them to be. Thus, I am going a tiny bit crazy until such time as I either figure it out or call it quits! Just kidding, there will be no quitting until I can no longer either type or take photos or a version of the two.
Thursday, or so I think, we went to check out what turned out to be just as a described, a hidden gem in the Orange County park system, Trimble Park. 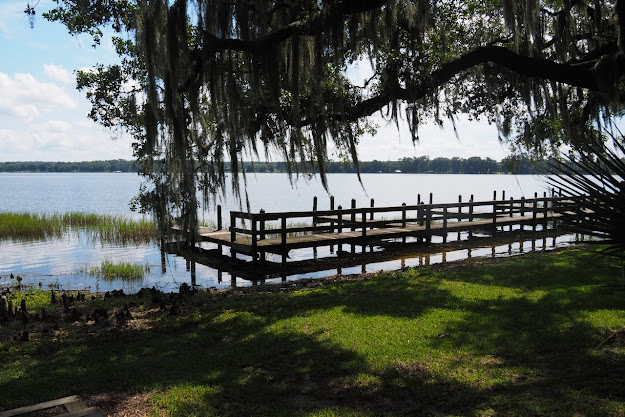 Off 441, almost to Mt. Dora, the closest town being Tangerine, it began when Sadie and R.J. Trimble donated the original 27.5 acres to Orange County in 1926. In the ensuing years, more acres were acquired and the park now has 71 acres set between two outstanding lakes. There's a bunch more to the story, however, you really don't care, so I will leave it at that. The trees are magnificent, tall Cypress and Pines, along with spreading Oak trees, some with so much moss you wonder it doesn't weight it down more. Nothing says the South like Sphagnum Moss. 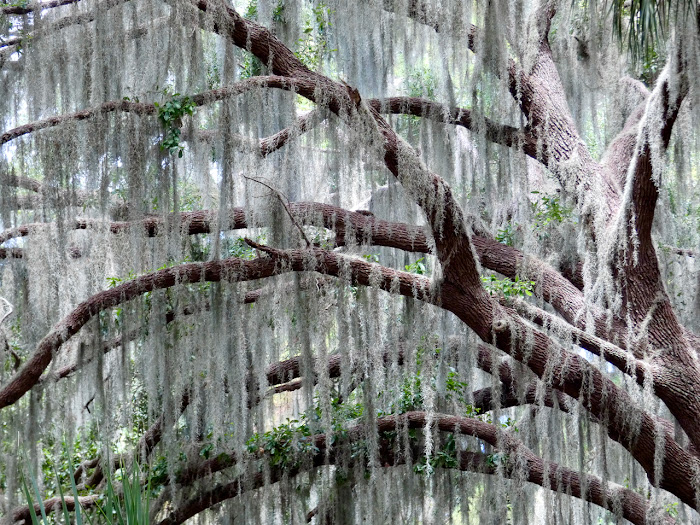 There are scads of picnic tables, as well as temporarily closed playground equipment, grills, and several fishing docks and boat ramps. 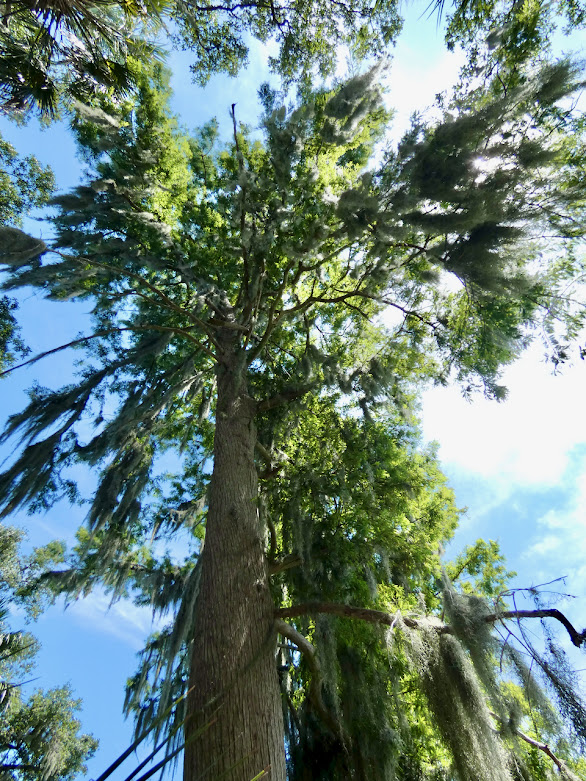 While hot (what else is new?), the shade was so dense that we hardly felt it, unlike our visit to Moss Park the previous week. While we were parking the car, I saw a yellow Swallowtail flitting about which tickled me pink as I've not seen one for awhile. Luckily, later on I caught one while resting on a bush. 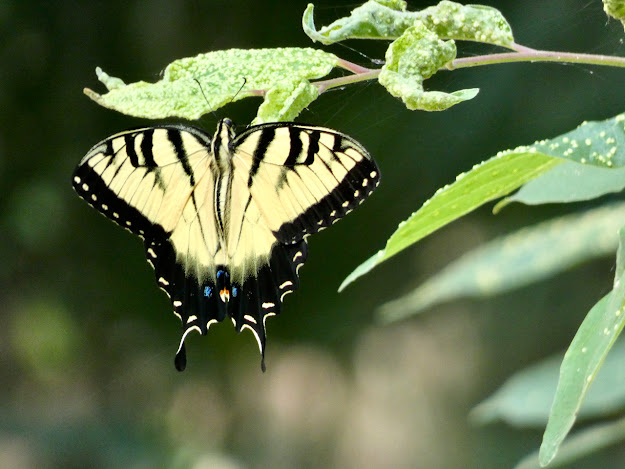 It's been a good long while since I saw a pink dragonfly, 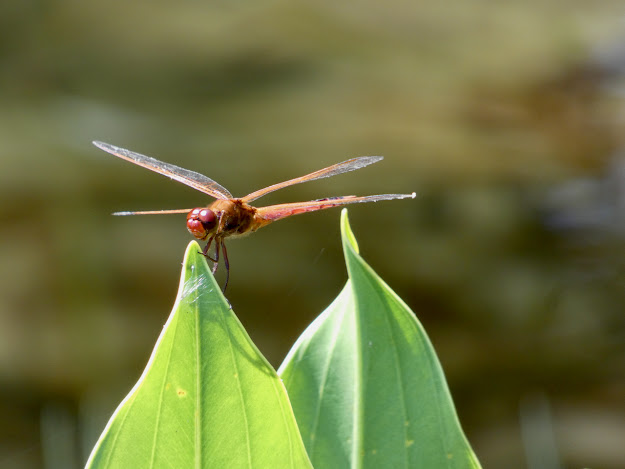 and probably just as long ago that I saw a green one. 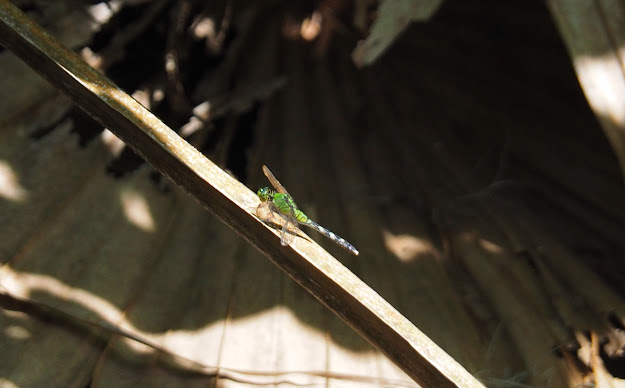 While I like seeing beautiful insects, what I really like.....you guessed it, the birds to be found in a lovely park! 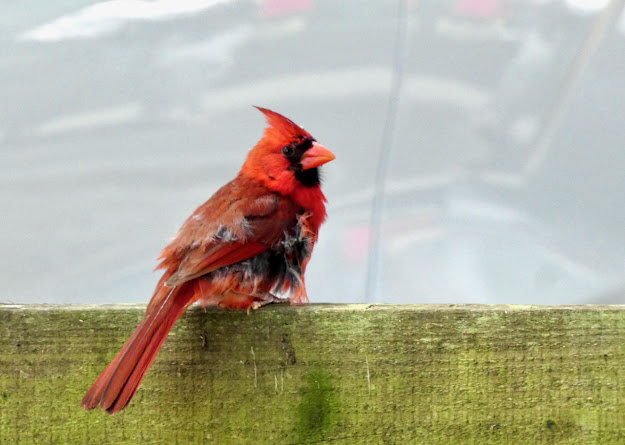 I have no idea if this male cardinal is molting already, or a youngster getting new feathers. The female was nearly as scruffy. 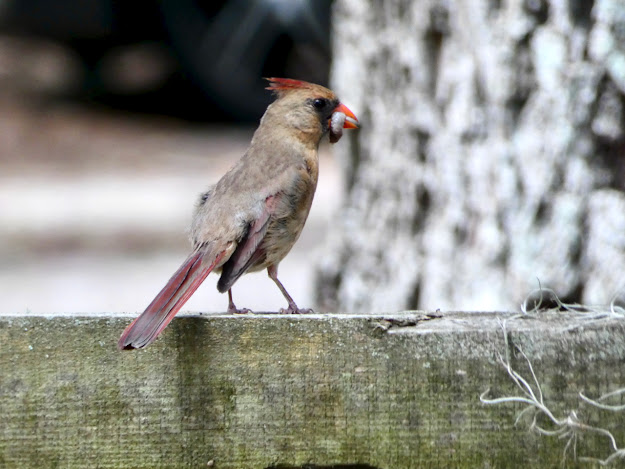 You may have already guessed the reason for our visit and if you guessed camping, you would be correct. There is a small, 15 space campground with about six sites directly lakeside that we were checking out. Count us very impressed, although whether we can actually camp in this heat is another story. At least now we know for the future if nothing else. Seriously we could find not a bad word to say about the park.
And yes, there is even a cute little library. 😀 The pickleball playing continues as the number of interested folks grows. One evening a sun shower helped keep the players cool. 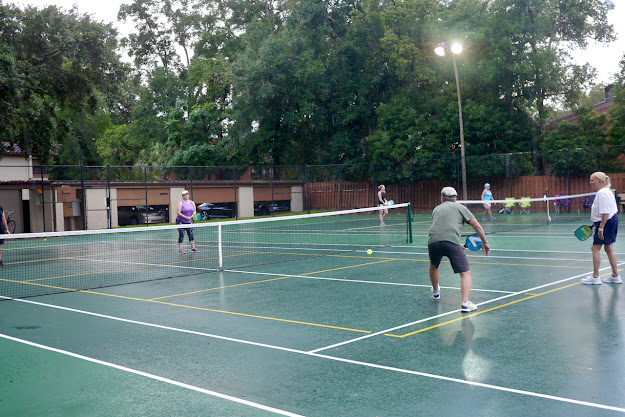 Unrelated to pickleball, I've got a kitchen tip for you that in all likelihood you already know about, but it was new to me. Getting the stem out of a strawberry when you want to slice them has proved problematic  for years. For some reason, I finally thought about using my potato peeler! 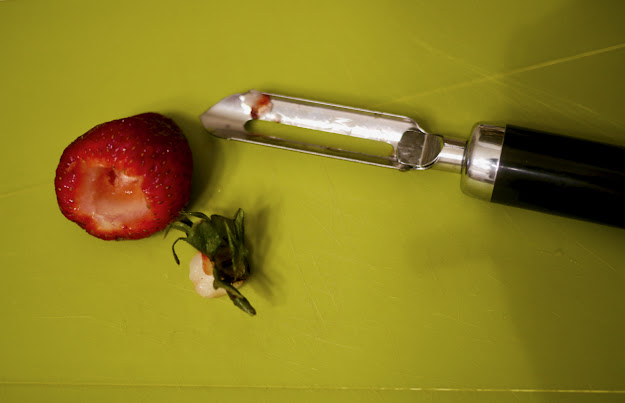 Have you tried this before? In my case, it worked like a charm.
Maybe it does look as if life is going on fairly normally, but there is just an underlying current of uneasiness for most people. Father's Day came, which meant all the boys (men), called their Dad. While talking to Matt, we discussed his upcoming birthday and what we were hoping to get him. Except, the store is currently closed in London, and this morning when I called the local one here, I got that familiar message about unexpected high call volume and the wait time would be one hour. NOT. Remember how we were thinking of re-doing our master bathroom when the weather became too hot for camping? Not happening. It's those kinds of things which I realize are super minor compared to others pandemic problems, but it is our reality and I can only speak write about what I know. On the other hand, there have most definitely been some silver linings for most of us. Yesterday ours came in the form of listening to a radio show that Matt hosts occasionally for his college alma mater, V89 at Florida State.  In order to keep the radio station going, alumni have helped fill the programming gap and that is where Matt comes into the story. While a student there he hosted a 3 hour show, part of what they call Legacies, devoted to singer/songwriters. Imagine that in today's radio landscape, a real dj that picks all of the music! I worked on a crazy hard puzzle while listening. Just as the show ended, David and Bill came over to feed Papa. Actually, David cooked an incredible steak while I made a few sides. While waiting on the food, we watched a super silly and fun show on Netflix called "The Floor is Lava." If you are looking for something to put a smile on your face, seriously, this would be the show. Jonathan called earlier in the day to visit with Bruce too.
So with blessings such as the above, not to mention recurring gorgeous sunsets most nights, I really have not a thing to complain about. We all still remain healthy which is the most important thing, even though the ongoing challenges are inconvenient. 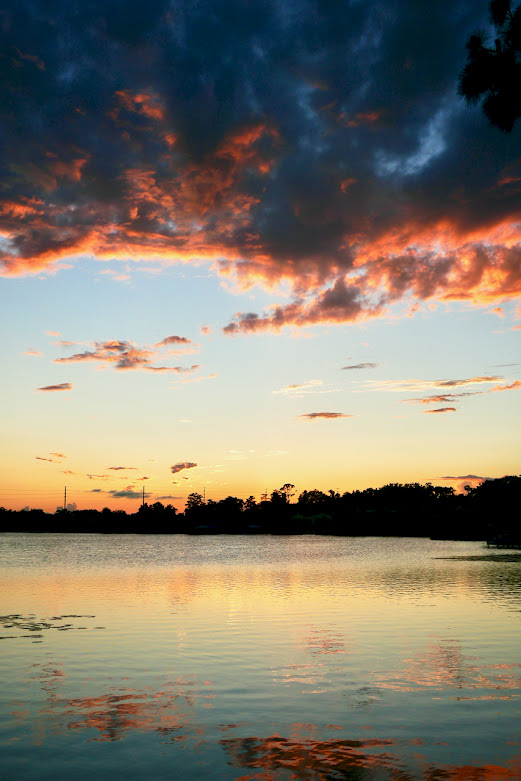 I continue to remind myself, that "this too shall pass", as it always does.
your friend,
Gail
p.s. If you missed my last post, you can find it here.
← Older Post Newer Post →
Loading...
Error