23A. Connection need at some coffee shops: WIFI CODE. Code, or password? When you're in the coffee shop, what do you ask for? The wifi code, or the wifi password? I know what I ask for, and it's not the "code". Maybe we can compromise on passcode?

32A. Parking ticket holder, perhaps: WIPER BLADE. Nice clue. Not a nice thing to find under your wiper blade though, the ones here in LA come with $$ signs attached. 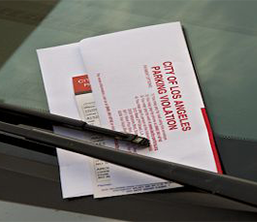 40A. Cut into: OPERATED ON. Ouch! Towards the end of his career, when Cal Ripken Jr. discussed his various surgeries at press conferences, he'd always say that he'd been "cut on", it always sounded much more painful than "had a procedure".

The two reveals working together leading us to OPEN WIDE and WIDE OPEN and what to look for in the other six entries:

I don't recall seeing a theme like this before - the two reveal entries work together and switch the theme halfway down - the first three entries split "WIDE" open, and the second theme entries have OPEN split wide. Very nicely done by Joe. It's always fun to see something a little different and this was a very slick twist on a standard gimmick.

Let's see what else we've got talk about:

1. Text: PING. The word has moved from tech-speak to common usage - to ping someone is to send a quick message that you're around if they want to respond back. The tech usage was in computer and internet networks. You would "ping" a piece of equipment with a network signal to see if it was alive - if it was, it would send an echo back, much like a sonar "ping" would be echoed back to the origin. The world of sonar is where the term came from, so if one of your geek friends tries to tell you that it stands for "Packet Internet Groper" you can correct them.

5. Nutmeg spice: MACE. The aril of a nutmeg seed is mace - it has a more earthy flavor than the nutmeg itself.

9. Newton trio: LAWS. Laws of Motion, if you recall from your science classes.

16. Fur wrap: STOLE. A stole could be described as a fashion accessory, and a fashion thief's accessory would sell a stolen stole. All clear?

19. Husky hello: ARF! Huskies don't look like they "arf" to me. More a "grrrr". It's probably all the Itidarods.

20. Whitman's "When Lilacs Last in the Dooryard Bloom'd," e.g.: ELEGY. So help me out with this "bloom'd" thing. What's with the apostrophes and poets? It doesn't save any space, nor add anything to the word. Why didn't Walt just write "bloomed"? Same amount of ink, same pronunciation.

27. Telluride automaker: KIA. Not based in Telluride, obviously. They're pretty ugly to my eye, but of course your mileage may vary.

28. Direction opp. 8-Down: WSW. I'm not a big fan of the compass-point fill, but at least this pair have a crack at being something different from the stultifying "Random City to Anytown dir.".

30. "Avatar" actress Saldana: ZOË. Let's give her the umlaut back.

36. Iraqi money: DINAR. I tried REALS first, not quite right.

43. "The Last Jedi" heroine: REY. We're watching the Star Wars movies in narrative-chronological order. There are so many crossword references it seemed like the right thing to do. Plus, they are actually pretty good :)

44. Cholesterol letters: HDL. I had my numbers checked pre-lockdown, all good. My bad cholesterol used to be very high, but eating a lot of Asian food has helped considerably.

48. Like proofed dough: RISEN. You can prove a loaf and it doesn't rise at all, that's why it's called "proving" to make sure that the yeast is active.

65. Olympus neighbor: OSSA. Nice to see OSSA and ETNA hanging out so nicely. Greeks and Romans, getting along. Mt. Ossa looks volcanic from its shape, although Wikipedia is silent on its vulcan origins.

66. Sicilian volcano: ETNA. There is no doubt that this one goes off every now and again.

1. Lab glassware eponym: PETRI. Jules Richard Petri developed a shallow, lidded, glass dish to grow cultures in the lab. Alexander Fleming famously used them to isolate the future antobiotic penicillin, and so Jules gets a high-five from the human race.

4. Aegean country: GREECE. Go and see Mt. Ossa while you're there. From the top you might be able to see the sea - the Aegean Sea - the coastline is no more than five miles away and the mountain is 6,500 feet high, so it's a fair bet you can on a clear day.

5. Worked in the yard: MOWED

6. "Opposites attract," for one: ADAGE

10. Dell gaming brand whose name was inspired by "The X-Files": ALIENWARE. Thank you crosses.

11. Camel's favorite time?: WEDNESDAY. A sideways reference to an insurance company commercial - Wednesday is "Hump Day". Thankfully one of the very few (insert insurance company name here) commercials which are actually entertaining, rather than the 99% majority that have you reaching for "mute" button. Don't they have focus groups any more? Or do the focus groups still find someone wearing a white apron or an amphibian with a British accent amusing? I suppose they do.

21. Movie mogul Marcus: LOEW. The theater chain he founded is now a piece of history, following mergers, buyouts, buy-backs and more corporate divestments and acquisitions. The company ended up as part of the AMC group and the brand name was phased out in 2017.

30. Old storage devices: ZIP DRIVES. Funny how these are now "old". When we used to give these away at trade shows, we needed the riot squad on hand so we didn't get overrun.

35. Calif. NFLer: LA RAM. The Rams organization have come in for no little criticism recently for their proposed new logo, which look like it belongs more to the Chargers down the street: 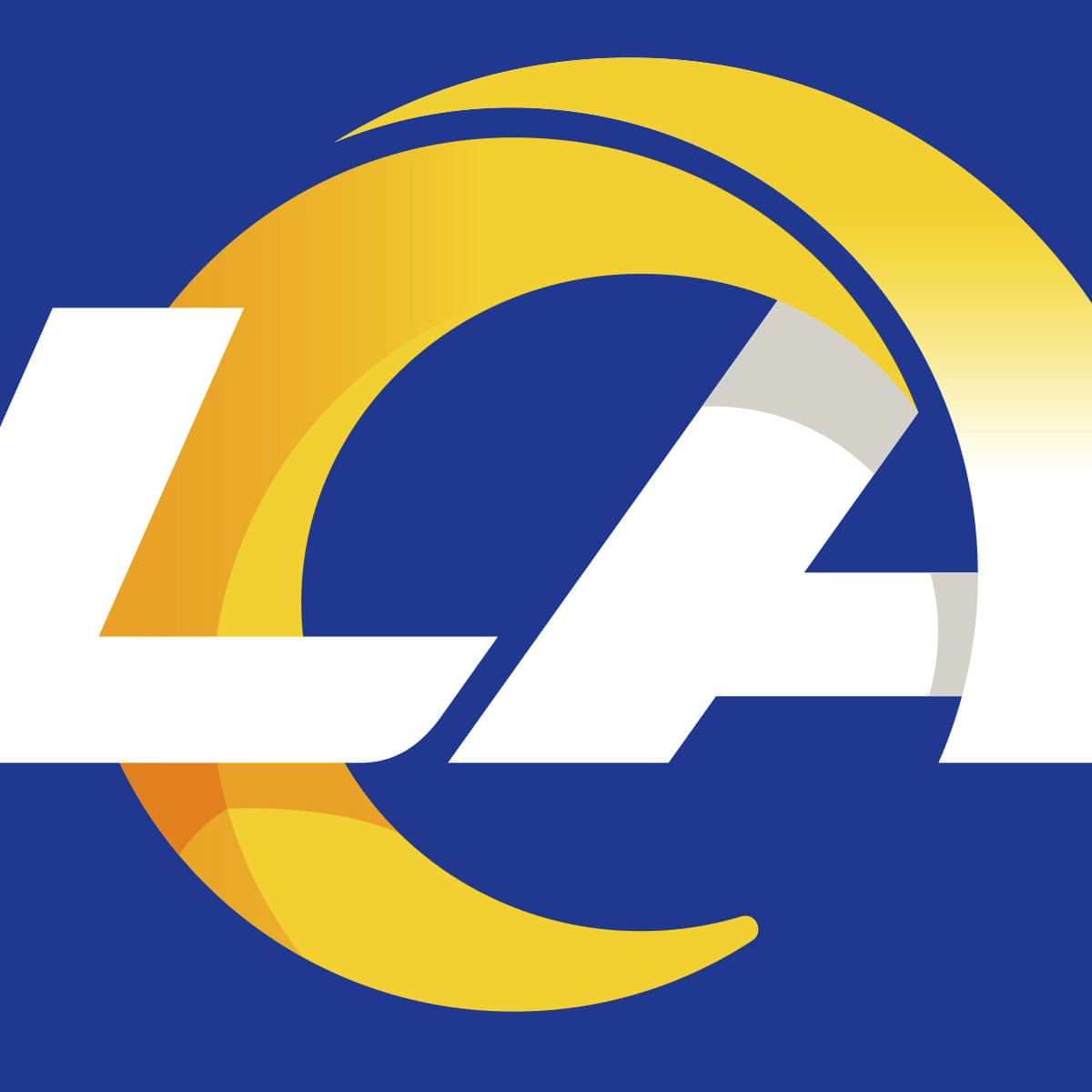 41. Large load: TON. Depends what's carrying it. It wouldn't work out well in my trunk, but a container ship wouldn't notice the odd ton here or there.

50. Heist mastermind of film: OCEAN. I think the movie franchise has mined the "Ocean's" seam to exhaustion at this point.

51. Bamboo eater: PANDA. Is Ron Artest still "The Panda's Friend", or did he move on to another name? I lost track after "Metta World Peace".

54. Foreign policy advisory gp.: N.S.C. National Security Council. How effective it is at the moment is not for me to say.

55. Slightly, in scores: POCO. Music. Here's some, which I can't read. There appear to be some kick-ass arpeggios in the bass clef, way beyond my left-hand technique.

56. Difficult position: SPOT. You could equally be in a good spot, as opposed to a bad one.

Fittingly, that wraps up another EPI-C journey through the Thursday puzzle. Thanks to Joe again for something a little different, and some thoughtful work with the rest of the grid.

And, right on time, here IS the grid: 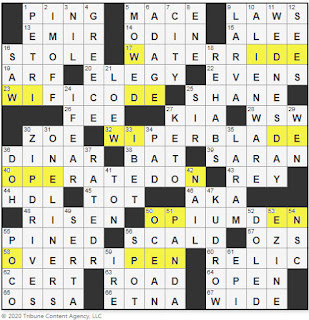