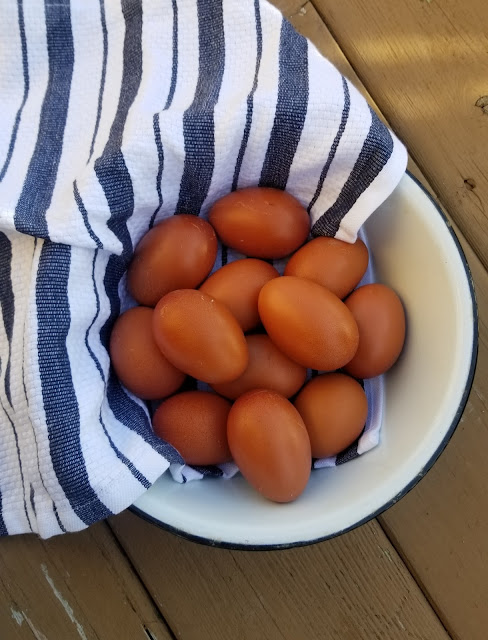 French Copper Marans chickens are the official "chocolate egg" layers of the chicken world.
They lay those super deep dark brown eggs that you might have seen gracing Instagram on various backyard chicken keepers accounts.
But did you know that the French breed of chicken called the Marans (named after the French town of Marans where they originated) lays some of the darkest eggs of any chicken breed? 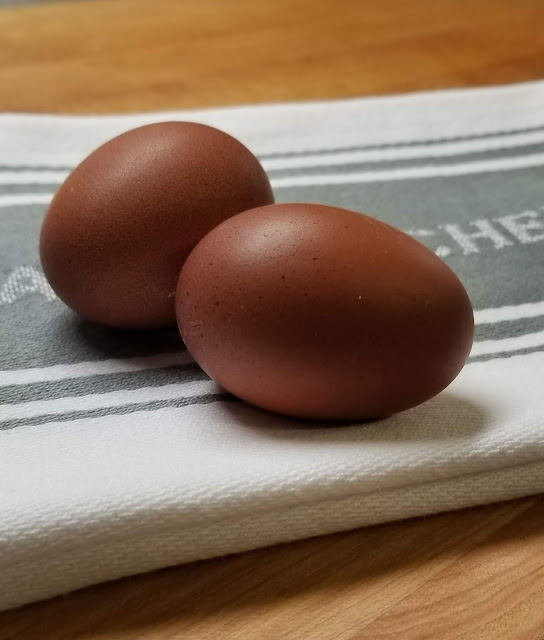 
Did you know that the word "Marans" is always plural (and always should be capitalized) since its the name of the French town where the breed originated? It is incorrect to refer to a single chicken as a Maran.
So one chicken is a Marans, and two chickens are two Marans... 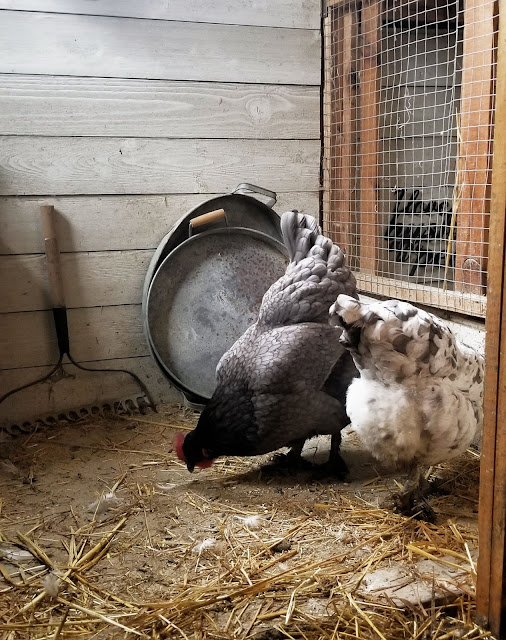 Like all other eggs, a Marans egg starts out white. Then during the laying process, the hen deposits brown pigment onto the surface, making the egg that nice deep chocolate brown color.
Marans breeders are careful to keep soft bedding in the nesting boxes because the pigment will scrape off, especially when the egg is freshly laid. You can scrape it off with your fingernail actually. 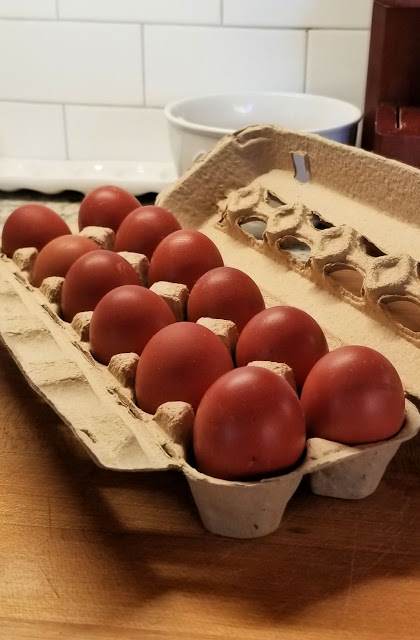 Did you know that some French chefs are reputed to ONLY cook with Marans eggs, claiming they are superior in taste and quality?
They actually might be onto something because according to the French Ministry of Agriculture,Marans eggshells have smaller pores than the shells of other breeds and thicker shells and inner membranes,making them far less likely to contain salmonella and allowing the Marans eggs to stay fresher longer.
Note: This thicker outer layer can make hatching Marans eggs a bit challenging, with a lower success rate than other breeds.
In general, an egg's taste is dictated byhow fresh an egg isand the overall diet of the hen that laid it, but who are we to argue with French chefs?)

An interesting bit of literary trivia: the fictional character James Bond actually requested a Marans egg for breakfast each morning in the original series of books written by Ian Fleming and was filmed eating one in the movie From Russia with Love. 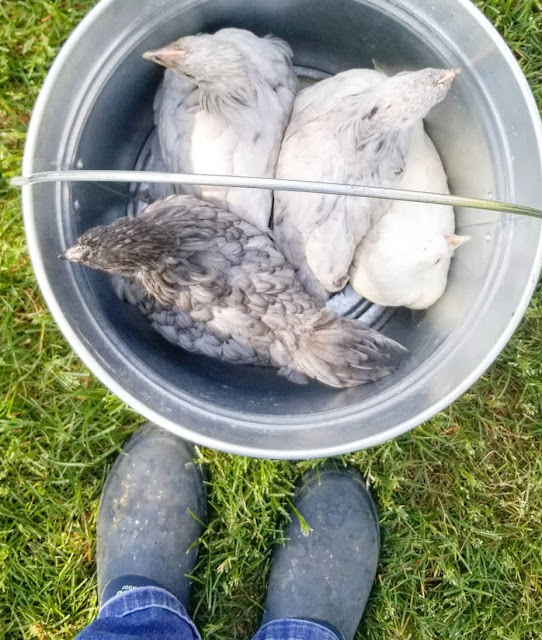 About the Marans Breed of Chicken

Marans originated in French and were brought to England in the 1930's, but not available in the US until 2000.

The French Marans have feathered feet which makes them kind of unique in the chicken world. There are only a handful of breeds of chickens with feathered feet besides the Marans, including Faverolles, Cochins, Sultans, Brahmas and Silkies.

The English Marans, however, are clean legged. Both varieties can be found in the US currently.

Marans are generally friendly and docile. They aren't terribly broody, but are good foragers and a nice, hardy breed.They are decent layers, producing 150-200 eggs per year on average.

These are Black Copper Marans. Black is probably the most common color of Marans chicken. 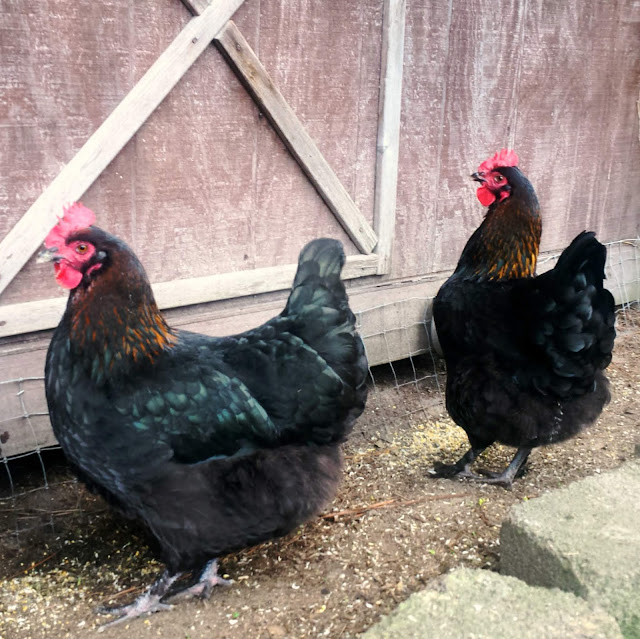 
This is a Blue Copper Marans. I find the Blues to be more friendly than the Blacks for some reason. 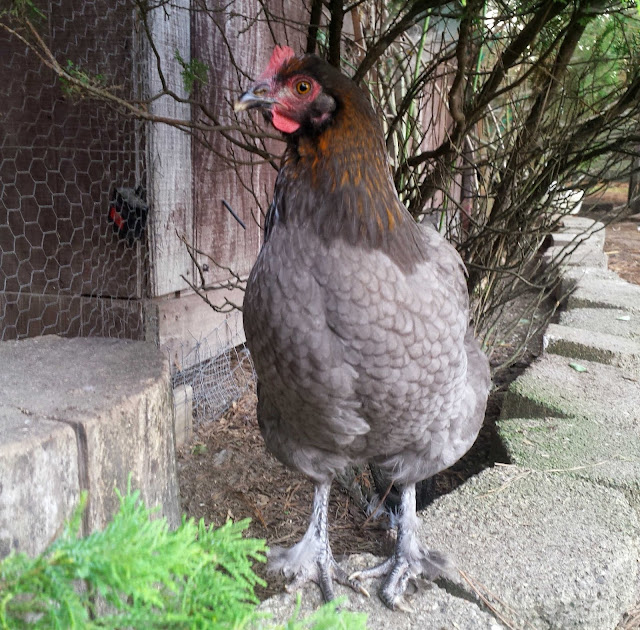 This is a Blue Marans. Notice she doesn't have the copper on her neck like the hen in the previous photo. 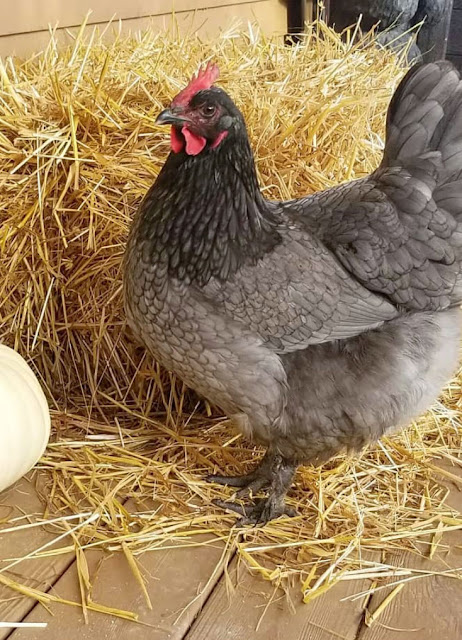 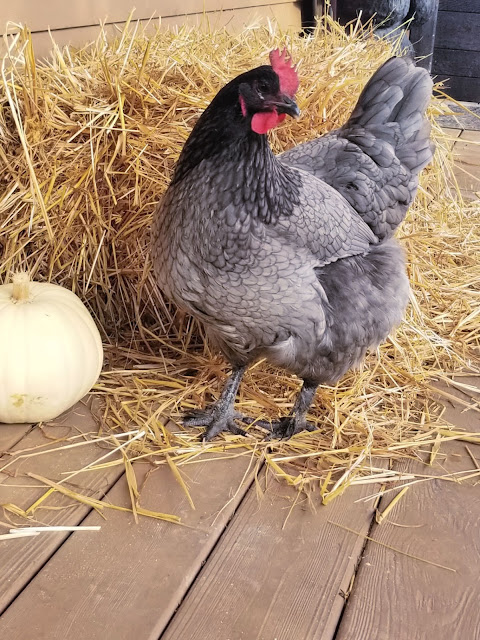 This is a Splash Marans. My Splash are some of my friendliest and most affectionate hens - and also some of the prettiest! 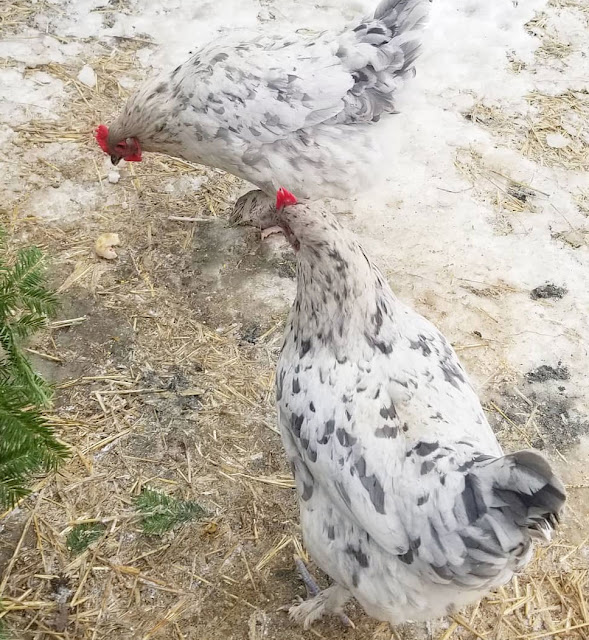 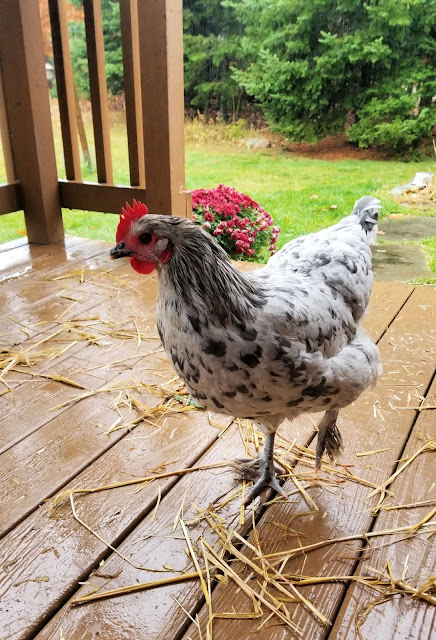 Likely the darkest eggs you will get from you Marans will be the very first she lays.
For one thing, those eggs tend to be smaller, so the same amount of pigment that will eventually need to cover a larger shell surface will be covering a smaller one, resulting in a darker shade.
In fact, the French Marans breeders don't even start to grade the color of a Marans eggs until a pullet has laid a dozen eggs - since the first few eggs can sometimes be a darker color that she won't be able to reproduce again in her laying life.

This is the official Marans Egg Color Chart from the Marans of America Club. I aspire to achieve the darkest shade of Marans eggs! Maybe one day... 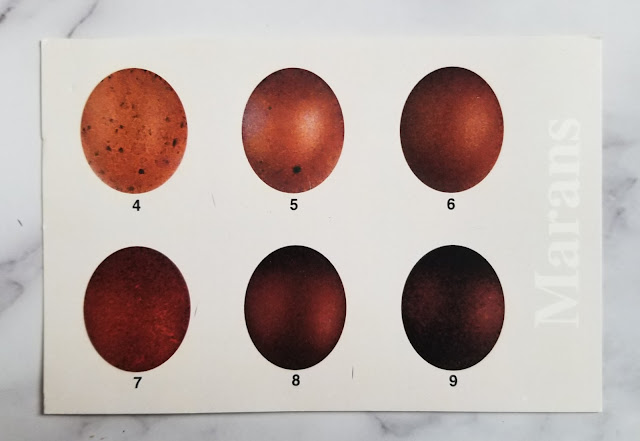 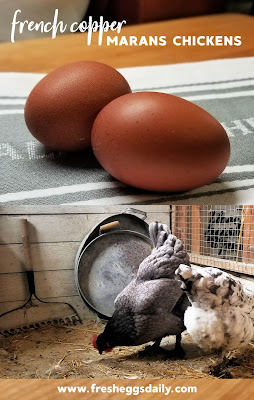