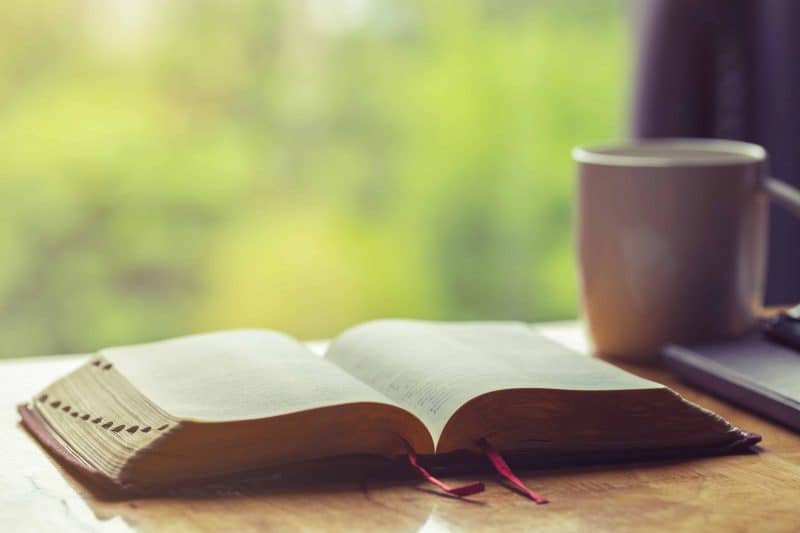 What a joy to start another week in the word with you and what a privilege to be able to sit at the Father’s feet together!

Just a little note about these Bible studies and how/when they are written: I spent all of last year working on Bible notes each night before posting in the morning and had hoped not to do that this year. When we began, I had managed to get 18 days ahead but here we are, in Leviticus, and guess what? I’m back to writing each day’s notes the night before. I just chuckle and shake my head at myself. We make our plans but in the end, the Father’s wisdom and ways will prevail. May it always be so! I just wanted to let you know as there may be times in which life pulls me away and my notes might be more abbreviated. This is a top priority for me and I hope to avoid that but it can happen. Having said that, special thanks to Amy Castor for helping me out with some great additional info that I’m adding to today’s notes!

Let’s dive in with my ramblings first:

We are learning an awful lot and it’s quite a bit to take in. By now, we’ve become more accustomed to setting aside time each day to study the Word. I hope you’re seeing the blessings in that!

Today, I want to up the stakes a bit. I want to encourage you to take time, throughout your day, to think over all we’ve learned, digest it a bit, turn it over in your mind, and talk it out with the Father. It is important that we internalize this knowledge that has been given to us and process it through our system so that we can glean from it all the Father wants to give us at this time. I say “at this time” because His wisdom tends to be revealed to us slowly, in layers. He lovingly guides and tutors us as we continue to mature. Just as you wouldn’t teach a kindergartener algebra, the Father lays down foundational knowledge within us and then builds upon that as we continue in His word. We are all his children and He is raising us up in His image!

I need to take a moment to define my personal view of intentional sin. I also need to clarify right now that this is my personal view – based on what I’ve read in the Bible – but does not carry any weight beyond being the opinion of a human, freely discarded in light of YHWH’s wisdom.

When we read a commandment, when we clearly see the Father tell us to do something or not to do something, and we make a willful decision to go against that, to do it anyway, with the thought that He either won’t notice, won’t care, or will forgive us regardless, that is intentional sin. It is also known as High Handed sin.

Now, there are times in which we may sin intentionally on impulse. Envy, Greed, Anger, all of those emotions that grow opposite of the fruits of the spirit come to the forefront and we follow them. Afterwards, we realize what we’ve done, are consumed with guilt, and repent with our wholehearted, asking for forgiveness. We were not openly thinking about sinning against the Father, it was not a decision to sin against the Father, and yet we realize after the fact that we have done just that. There is a difference between this and high handed sin. However, once we realize what we’ve done, if there is no remorse or repentance and we clearly see and become aware that we are going directly against the Father and decide to keep on going, well, that sin has just gone up another level.

Further, I know a lot of people have been uncomfortable with talking, reading, or even thinking about the concept of sin. Just the word “sin” feels off putting in our day and age to a believer. I’d like to point out, with sincere love and compassion, that we are discussing this because we are reading about it in God’s Word. Not because Christy Jordan wants to talk about sin or point it out in others.

On the contrary, I use YHWH’s Word to find sin within myself so that I may deal with it, bring it before Him, and remove one more stone that has built a wall between myself and Him. We have been taught that to look for sin in our lives is “legalism” but when we read YHWH’s word we will find that what the world calls “legalism”, the Father considers “obedience-ism”.

Now, I dont know anyone’s motivation in obeying the Father but the world tries to tell us that anyone who seeks to live in obedience to the Creator is doing so because they are trying to earn their salvation – this is one of the adversaries more successful teachings. We are saved by grace alone through faith in our Messiah. In God’s World, however, we don’t obey in order that He will save us but because He has saved us. Obedience is not the root of our salvation but the fruit of it. It takes some time to untangle ourselves from the web we’ve been tangled up in and the Father knows that. Be patient. Coming from the World into the Word is like coming out of a confusing fog at times but as we continue in our walk the air clears. One of the number one things we’ve been taught in this world is that the world offers freedom and obedience to YHWH is bondage. The Father shows us that the opposite is true.

What the world has taught us is, by design, in direct contrast to what the Father teaches us.

You know those commandments we wrote out last week? The Big 10. Following those will change everything. I want to encourage you to go back to where you wrote them and read over them again, really focus, dig deeper into each one, pick every morsel of wisdom you can off of those bones, and then put the bones in a pot and start stewing them to get even more richness! There are layers to each commandment and we’ve only scratched the surface!

The goal is that we do the best we can with what we know and once we know better, we do better.

And back to the fruits of the Spirit, if we are constantly aware of and doing our best to operate within those, we will save ourselves and those around us a tremendous amount of heartache.

Another note: the Father is patient with us, especially when He sees that we’ve set our hearts to understand. I know for a fact He will be patient with you because I have seen how patient He has been with me and y’all, our Dear Father has had to put in some serious overtime hours dragging me along behind Him on this path!

We see a lot of language today about people becoming aware of their sin: sin being made known to the sinner and people realizing their sin. There is a a lot of wisdom to glean from those verses but I want to offer the beginnings of that wisdom: today we will see that being unaware of sin does not make it go away. Ignorance does not mean we haven’t sinned. Just because we didn’t know the speed limit does not excuse us from a speeding ticket. However, YHWH, in His grace, does offer us a means to pay the fine so that we are not bound by the guilt. One point to consider though, once we’ve been given a ticket and that ticket is paid, does that give us freedom to speed for the rest of our lives? Or now that the ticket has been paid and we’ve been forgiven for our ignorance or even our intentional speeding, should we instead move forward far more aware of the laws and careful not to speed in the future?

And now we move on to sweet Amy’s notes!

So now we get into ch. 5-7, which all discuss the Asham offering – translated as “guilt offering”. This was for ignorant sin. There are 4 different categories of this offering:
1) Lev. 5:1-13: for someone who hears, sees or has known searing, touches any unclean matter, or speaks rashly – the sacrifice was a female goat or lamb, or 2 turtledoves or 2 pigeons or 1/10 ephah of flour.
2) Lev. 5:15-19: for someone who sins against the set-apart matters of YWHH (i.e. regulations of the Temple service) – the sacrifice was a ram (sheep) and valuation in silver plus 1/5th.
3) for a leper after s/he has been healed – the sacrifice was one male lamb! (reference Lev 14:1, Lev 12:13, Lev 12:21, 24:25)
4) for a Nazarite vow – the sacrifice was one male lamb! (reference Numbers 6:12)
There are only 2 occasions when a male lamb is sacrificed as the Asham offering for sin. When a leper is healed, and when a Nazarite vow is taken.
This becomes all the more poignant when we discover that YHWH specifically told the prophet Isaiah that Messiah would offer Himself up as the Asham offering.
Isa 53:10 – “…He made Himself an Asham offering…”
John 1:29, John 1:36 “…See the Lamb of Elohim who takes away the sin of the world!”
1 Peter 3:18 “…Messiah once suffered for sins,….”
The Asham offering is the only sacrifice for sin that requires a male lamb. The only one!

Lev 7:11-34 talks about offerings of peace and thanksgiving…I would liken it to charitable donations above and beyond tithing in our world today. I used to think all the ancient sacrifices in Judaism were for sins, but here we see it’s so much more! P.S.  the Hebrew word for peace offering is “Shelem” (part of the name of Jerusalem or Yerushalem in Hebrew). It’s the same characters that form the word “Shalom” just different vowel points 🙂

Lev 7:23, 25 – I had a thought about this a while ago, about not eating the fat. I wanted to know what Father meant by it, and I thought fat represented something plush and extra… comfort…Father asks for that part in most sacrifices. I think it’s similar to how He wants us to circumcise our hearts. He wants us to cut off the extra, the unnecessary, the things that add luxury and comfort to our lives (to a certain extend) – are we willing to let go of those things?
Thank you for diving into the word with us today! I have another challenge for you.
As we’ve been reading and as we will continue to read in Exodus and on into every other book coming up we are going to see, time and again, that details matter to YHWH. I’ve talked about this in my notes at least a few times so far and the other day Alissa DeSalvo showed me that she had written it on a post it note and stuck it in her planner as a reminder. What a wonderful reminder that is! I followed suit and did the same.
So today’s challenge is to take a post it note, index card, or piece of paper and write on it

Details matter to YHWH (or God, if you prefer). 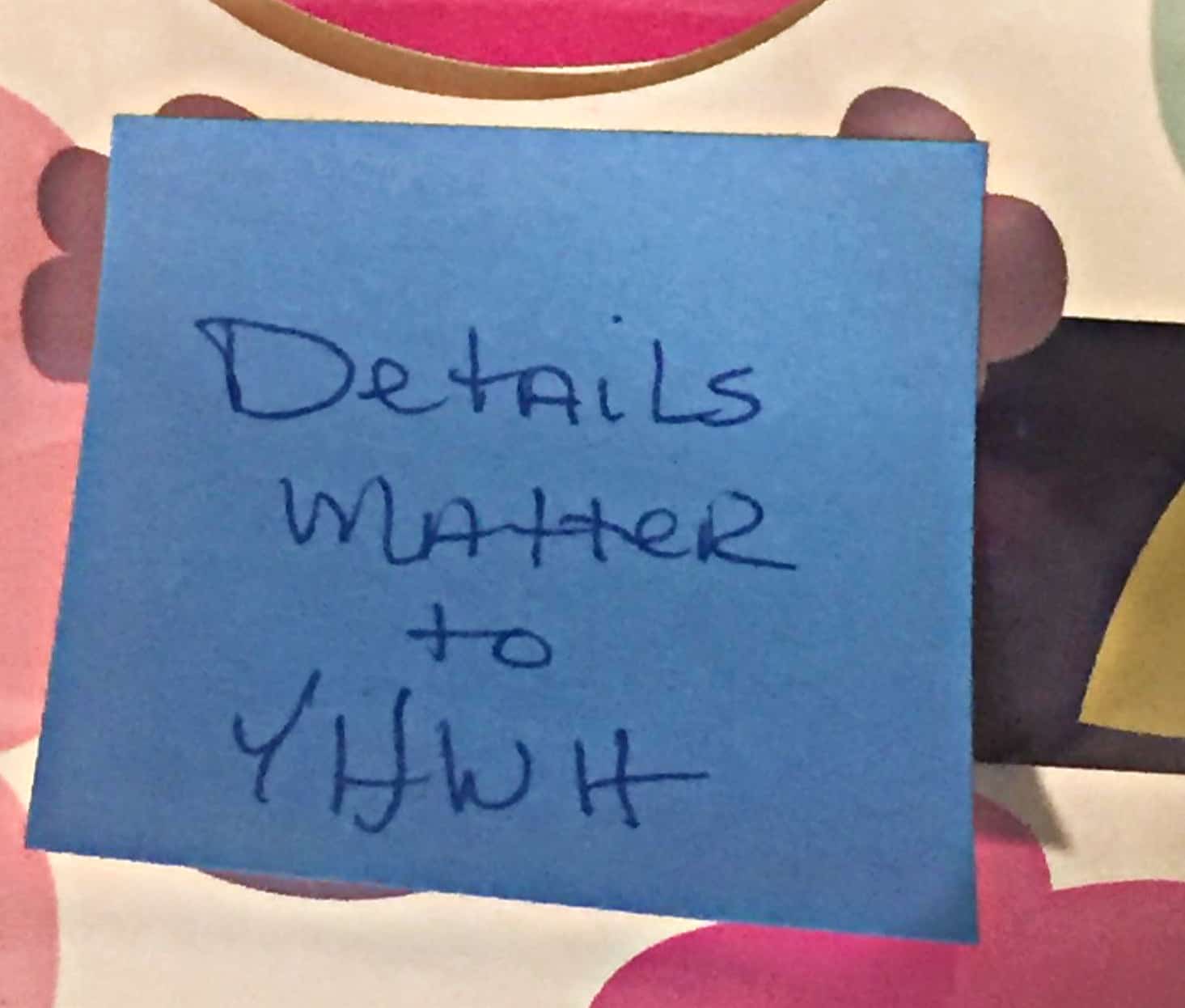 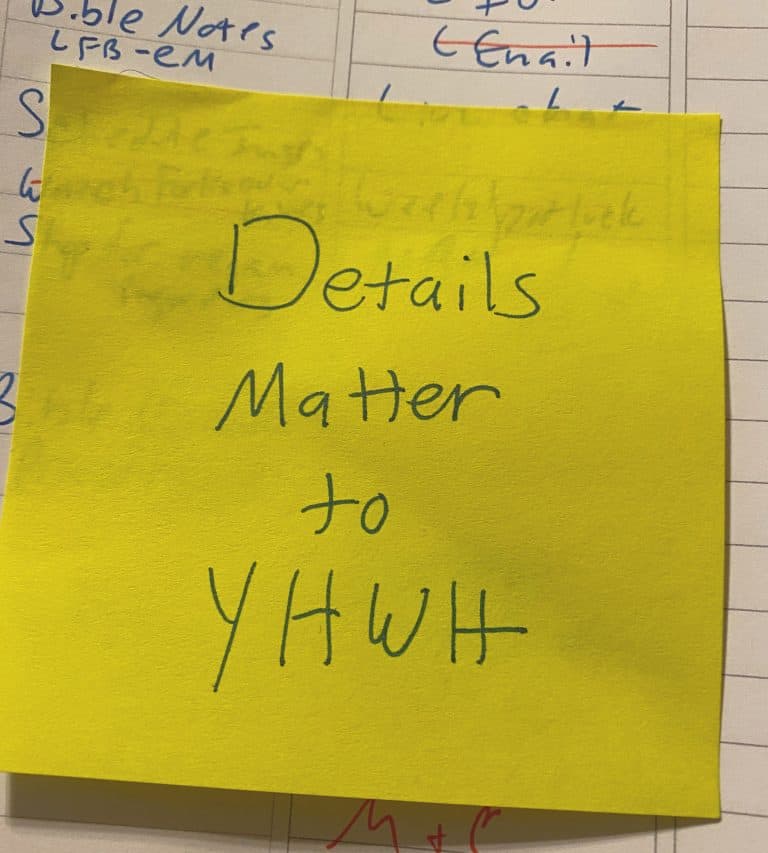 Test everything, Hold tight to what is good! 1 These 5:21

May YHWH bless the reading of His Word!

Note: There is a print link embedded within this post, please visit this post to print it.
Visit the Faith Homepage  • Read my statement of Faith • Print the November Readings • Begin at the beginning with our Genesis notes